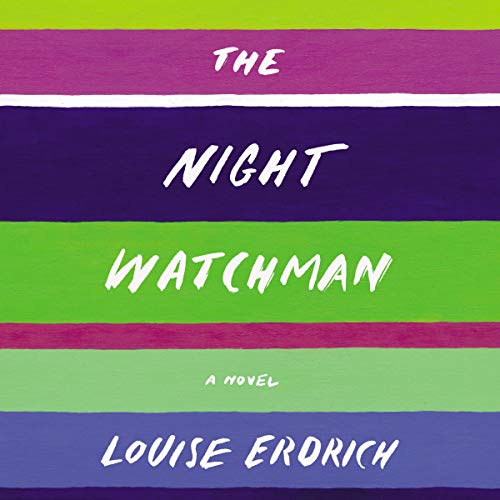 Books have their unique ways of clearing the lenses through which we view life. They tell us stories of people whose struggles may not have found a prominent place in history books. Louise Erdrich’s The Night Watchman revolves around one such nugget of history.

The central theme of the book is the fight against Native dispossession from North Dakota by the Turtle Mountain Chippewa tribe, which was led by Louise Erdrich’s grandfather, Patrick Gourneau. The protagonist of the book, Thomas Wazhashk, is created in the image of Gourneau, who fought against a 1953 bill introduced by Senator Arthur V. Watkins to terminate the rights of the Chippewa tribe over their land in the reservation; Gorneau led a delegation of tribal Council Members in protest. Like Gourneau, Thomas is a night watchman in a jewel-bearing plant, the first factory located near the Turtle Mountain Reservation in rural North Dakota. Thomas spends every night guarding the factory, and during the day he meets with tribal elders as they plan to take their protest against Watkins’ bill to Washington, DC. Their efforts, however, require money the tribe does not have.

Thomas’s wife, Rose, not only supports him in this endeavor, but also is a pillar of the Chippewa community whose identity Thomas and other tribal leaders seek to preserve. Many women from the tribe find employment in the factory, putting beads on jewelry. One of these women is Patrice Paranteau, who happens to be Thomas’s niece. Patrice is a fierce, strong, independent young woman who single-handedly takes care of her mother and brother and continues to look for her sister, Vera, who went to the Cities and never came back. Unlike the other women in the tribe, Patrice is not looking for a husband and children, although there are a few men who desire her affection. She wants self-sufficiency and financial independence so she can stop her alcoholic and abusive father from hurting her mother and brother. Patrice saves every penny to fund her search for her big sister, Vera. Rumor has it that Vera has been seen in the city with a baby. Patrice never gives up hope that Vera will return, even after she finds despairing signs of Vera’s death when she goes to Minneapolis to look for her. During her search for Vera, Patrice encounters extreme violence and ugliness that endangers her own life, yet she remains undaunted. Louise Erdrich does not shy away from showing her readers the violence and exploitation that Native American women are subjected to in real life.

Although the novel revolves around the Chippewa tribe’s determination to stop the Termination Bill, Erdrich weaves a beautiful and sensitive story of love, loss, and hope, with characters who will remain in the heart of readers long after they finish the book. Each character created with utmost love and minutiae is a beautiful composite of the whole Turtle Mountain Chippewa tribe, who band together to fight for their existence and identity under Thomas’s leadership. For me, the character of Patrice Paranteau embodies the indomitable spirit, the fierceness, the mysticism, and the harmony of Native American tribes.

This was a spectacular book, incorporating the struggles of the Turtle Mountain Chippewa tribe as well as their resilience and sensitivity. I am still wandering in the pages of the book where the line between reality and paranormal sometimes became blurry, but it made perfect sense in the world that Erdrich creates for her predecessors. My library-sponsored book club, Global Reads, discussed this book a few weeks ago. We all agreed this was a beautiful story, an important story, a story that needs to be read to learn how people with little power rose up to the all-powerful government to demand what was rightfully theirs.

The Night Watchman by Louise Erdrich is available in print as well as in ebook and eaudiobook format from Libby/OverDrive. Louise Erdrich is the author of seventeen novels and the owner of Birchbark Books, an independent bookstore in Minneapolis.

Piyali is an instructor and research specialist at the Miller Branch of HCLS, where she co-facilitates both Global Reads and Strictly Historical Fiction.