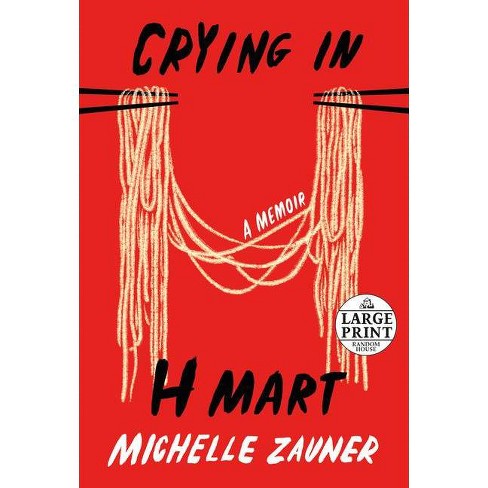 I’d be remiss to write about Michelle Zauner’s Crying in H Mart without mentioning Psychpomp, the 2016 Japanese Breakfast album that served as a preview for the memoir that debuted at No. 2 on The New York Times‘ best sellers List. Passages describing the creation of the album are brief, but lyrics are scattered throughout the memoir like Easter eggs.

Zauner recorded the album in Eugene in the months after her mother died. Zauner’s mother is on the album cover, reaching toward the camera. It’s a rad shoegaze album full of great lyrics, and it’s my 2-year-old daughter’s favorite album. Kiki’s been listening to it since she was born. She points to this album cover when she wants to bop:

Zauner, who was born in Seoul; raised in Eugene, Oregon; went to school in Philadelphia; and now lives in Brooklyn has a real Maryland vibe (whatever that means). Maybe it’s just me, but I felt close to Zauner after reading her book. It’s honest and intimate (I know that’s a book cover cliché and I still can’t help myself).

The memoir is incredible. Her mom was only 56 when she died, and Zauner had a complicated relationship with her. She illustrates their relationship by detailing a series of events from childhood conversations to her mom’s final word. The book is only around 250 pages, but Zauner uses anecdotes and conversations like a pointillist uses points to create a full portrait. Her mother is down-to-earth, glamorous, pragmatic, whimsical, frustrating, mysterious, and lovely.

Zauner writes about eating food, making food, storing food, watching videos of other people make food (Maangchi gets her own chapter), and it’s all great. The passage where she makes her first real batch of kimchi is one of my favorites. Food is the constant in her relationship with her parents: “What they lacked in high culture, they made up for by spending their hard-earned money on the finest of delicacies. My childhood was rich with flavor – blood sausage, fish intestines, caviar. They loved good food, to make it, to seek it, to share it, and I was an honorary guest at their table.”

After her mother’s cancer diagnosis, her mental fantasies to cure her mom are heartbreaking. We’ve all tried to barter with the universe or with God to get something, and in that vein, Zauner writes, “I spent an hour on the treadmill. In my head I played a game with the numbers. I thought to myself, if I run at eight for another minute, the chemo will work. If I hit five miles in half an hour she’ll be cured.”

The details of Zauner’s childhood in Eugene and her visits with family in Seoul are highlights, but I found myself returning to the intimate moments between Zauner and her mother. Crying in H Mart is officially going to be a movie; I can’t wait for the screen adaptation, but I think it’s going to be a tearjerker.

You can place the book on hold, as many other folks want to read it right now, but it’s worth the wait. Also available as an eBook and eAudiobook. 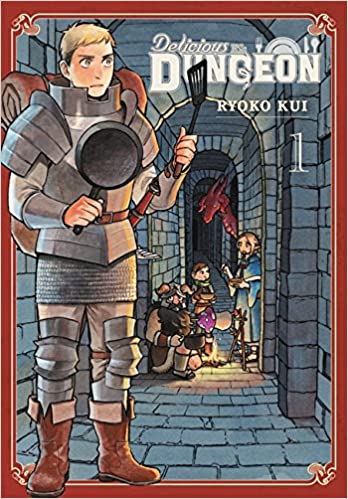 One of the great things about manga is the wide range of topics authors can focus on. Sure, there are still those popular power fantasy series, with heroes rising from lowly origins to take on a supreme evil. Dragon Ball Z or Kimetsu no Yaiba: Demon Slayer play a similar tune to Superman and Batman. Still, over the last few decades, comics in the West have stretched outside superheroes into new genres, like autobiography, travelogues, and other strange and unique styles of story. There’s no shortage of variety for a graphic novels reader in 2021.

But there’s one genre that the west hasn’t really explored, while manga has done so quite thoroughly: food. Yes, manga about baking, frying, cooking, and eating – they exist, and they’re quite popular, too!

More interestingly, as a genre, food manga isn’t strict about its features. In “shonen” manga, like Bleach or Naruto, there’s a specific path the hero follows, training to becoming better and overcoming new challenges to fulfill their dream. In romance manga, like Skip-Beat or Nana, our protagonist stumbles into young love, leaving us to wonder if those two crazy kids will or won’t finally kiss (until they finally do (at the very end)).

But in food manga, you can really mix any other genre – like documentary or fantasy or combat or history – with the presentation and description of some aspect of food and cooking. The results can be intensely different!


Oishinbo is a more direct sort of food manga. In each of its six volumes, its author, Tetsu Kariya, focuses on a different aspect of Japanese cuisine and food culture (helpfully described in each title). In one volume, we can learn about ramen and gyoza (fried dumplings), those two staples of Japanese street food, and in another, a deep dive into sushi and sashimi, two varieties of raw fish with rice. Of course, there are gorgeous drawings of the dishes, feeding the reader’s eyes in the same way Studio Ghibli films do. But along the way, we’re told more about the history and culture surrounding the food, in addition to the step-by-step process of making each.

But this isn’t a printed Instagram feed of cool food art – no, there is a plot! Or, at least, there are characters. Shiro Yamaoka is a journalist who has a troubled family history with cooking, but he still tries to develop the “Ultimate Menu” as a project, visiting restaurants and chefs across Japan. He is joined by Yuko Karita, his assistant, as they sample foods and consider the history of the dishes alongside their own experiences. Keep in mind: Oishinbo ran for over 30 years and 111 volumes, and these few volumes we have are an “A La Carte” compilation. As such, the overarching story has been compressed and mostly removed, resulting in these translated volumes feeling like episodes of documentary travelogue. And that’s alright by me!

Reflecting the time in which the manga started, the characters have a very 1980s aesthetic to their designs. For long-time readers of comics, the style can be nostalgic, but even for new readers, I think the clearer and less-cute style helps the manga’s focus come through much clearer. And that focus? Food is good. It’s a perfect mini-series for amateur chefs, readers new to manga, or for anyone who wants to know more about Japanese cuisine.

On the far end from the realism of Oishinbo is Delicious in Dungeon, by Ryoko Kui. Yes, that’s a silly title, but this is a very silly series – about fantasy food!  One of the recent trends in anime/manga are stories featuring western-style fantasy, a la Lord of the Rings, Dungeons & Dragons roleplaying, and console roleplaying video games. Delicious in Dungeon is about a party of adventurers in such a fantasy world. You have Laios, the dimwitted human knight, Marcille, the squeamish elf mage, and Chilchuck, the halfling lockpick. They’re trying to get to the bottom of the dungeon to save Laios’ sister, but man, it’s a long way down…

During one of their hungrier moments, they meet Senshi, a dwarf, who shows them the craft of cooking beasts they find (and fight) in the dungeon. Which is, as you might imagine, a strange prospect for our adventurers, who aren’t sure if they want to eat boiled mandrakes or a wyvern egg scramble. But Senshi shows them the benefits and necessity of “eating off the land,” as they can delve deeper by cooking along the way.

So we have action and fighting, as the party battles various mythical monsters. But then we get Senshi cooking their conquest over a fire, using his shield as a wok. Kui draws the process of cooking and the final dish with the same care as Kariya did in Oishinbo, but instead of buckwheat noodles, it’s tentacles. Recipes are included with each fantastical dish, making the whole thing seem both real and absolutely ridiculous. Yet, you know, that roast dragon flank does look pretty good…

These are just two examples of food manga we have at HCLS! We have other series too:If you’re looking for another fantasy cooking series, Drifting Dragons has a visual style and tone similar to Delicious in Dungeon, but a large world and character designs reminiscent of Nausicaa of the Valley of the Wind.

If you’d rather have a more cozy experience, Otherworldly Izakaya Nobu is a slice of life story of fantasy characters (I told you it was a popular topic) magically transporting into an izakaya, a sort of pub in Japan.

Whether you’re new to comics or if you’re just hungry for something new (ha), food manga is a genre worth sampling.

Oishinbo and Delicious in Dungeon, and the above-listed series, are available in print from HCLS.

Khaleel has worked at the Miller Branch since 2015, though he’s been back and forth between HCLS and high school, college, and graduate school since 2003. 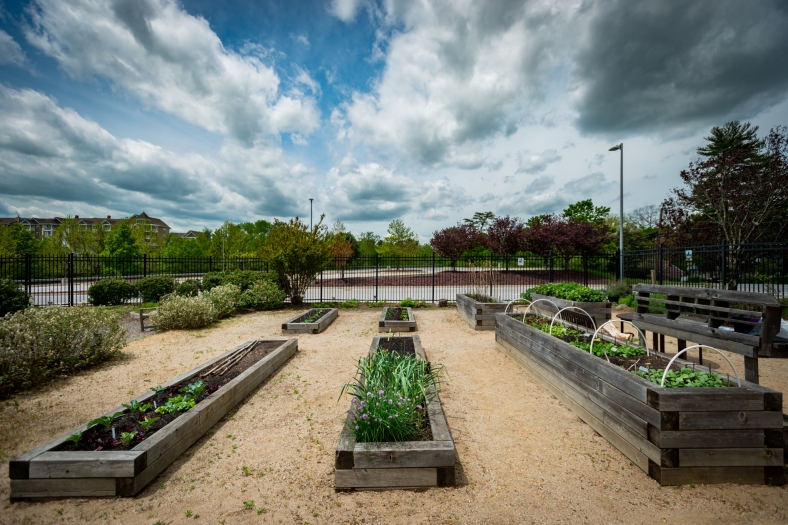 It’s time to plan a visit to the Enchanted Garden at the Miller Branch!  We are thrilled to invite visitors back to the garden beginning Saturday, May 8. Come and see what’s growing in our demonstration area, enjoy the blooms of the season, and feel the calming touch of nature.

How much food can we grow in the Enchanted Garden? This year we plan to find out! Our raised beds will be devoted to growing food to donate to the Howard County Food Bank. You’ll find a variety of lettuce, radish, broccoli, and cauliflower happily growing while we thwart the efforts of a nibbling bunny. The strawberries are bursting with blooms, potato shoots are poking up through the soil, and the peas are reaching for their trellis. We have greens galore in an assortment of bib and leaf lettuce.  Plus, we’re busy preparing more beds for summer crops like tomatoes, peppers, cucumbers, and squash.

A garden bed once devoted to summer annuals will be transformed into an edible landscape. We’re curious about ways to maximize our food yield, provide season-long blooms for the pollinators, and offer beauty to the beholder. Can you picture kale, chard, and basil side-by-side with zinnias, sunflowers, and marigolds? By combining annuals and vegetables in one patch, we hope to create a garden that challenges notions about what makes a garden and what is fitting for the front yard.

Look to the left of the front gate to see our newest garden bed. Thanks to the Howard County Garden Club, we have a new pollinator-themed garden filled with wildlife-friendly native plants and cultivars. Our new garden will support pollinators like bees, butterflies, and moths. We hope it will inspire visitors and budding youth gardeners to garden for wildlife.

Our Enchanted Garden is thriving with the help of many volunteers. We have more weeding and clean-up to do, but we think you’ll enjoy seeing what we’ve accomplished so far. There are new garden beds to behold and so many spring vegetables that you’ll work up an appetite. We look forward to seeing you in the garden soon!

Ann joined the Miller HCLS staff as the Enchanted Garden Coordinator and Instructor in 2012. When not gardening you’ll find her reading, cooking, and exploring trails in the Patapsco River Valley with her husband and dog.