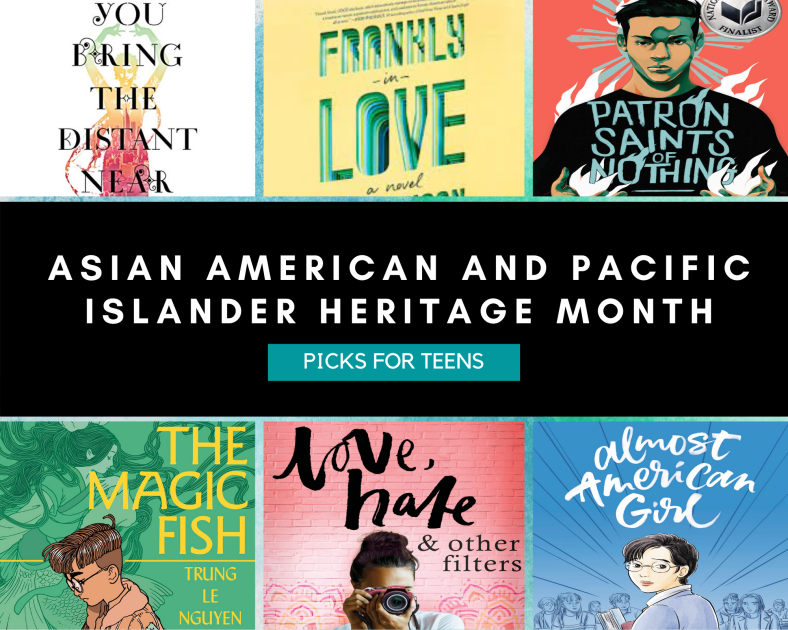 By the Elkridge Branch staff

It seems especially vital to raise up and celebrate Asian Americans and Pacific Islanders (AAPI) this year, during the increased violence and harassment faced by Asian Americans and Pacific Islanders across the United States. Racist attacks fueled by fear and hatred, especially surrounding the pandemic, have been on the rise in 2020 and 2021, including here in Howard County. We must all stand together against hatred and work to protect and honor the rich cultural heritage of the AAPI community. Reading “own voices” stories about the life experiences of Asian Americans and Pacific Islanders is a good starting point for increasing our understanding and appreciation of the AAPI community. See our suggestions aimed at readers of all ages, and keep an eye on our Facebook page for more titles as well.

Chibi Samurai Wants a Pet: An Adventure with Little Kunoichi the Ninja Girl by Sanae Ishida

Will Chibi Samurai find a special pet just for him? Join the adventure in this second beautiful picture book in the three-part Little Kunoichi series. Meet all kinds of creatures familiar in Japanese culture throughout this playful tale, and find out more about Japanese animals and culture with special notes at the end of the story.

Where can an elevator take you? Join your little one on their adventure with Iris, a little girl who loves to press the elevator buttons to go up or down the building where she lives. After the button accidently breaks, Iris is able to save it from the trash, and the elevator button takes her on new adventures in her room.

In this charming story about celebrating differences, a Chinese-American girl wishes for a garden of bright flowers instead of one full of bumpy, ugly vegetables, but her mother assures her that “these are better than flowers.” Once it’s time to harvest, the whole neighborhood agrees that those ugly vegetables turn into the most delicious soup! A recipe at the end invites readers to try their hand at making their own tasty vegetable soup.

With a new baby sibling on the way, spunky eight-year-old Cilla will make sure her family can’t forget about her. She vows to become a famous bestselling memoirist before the baby arrives. Being both Chinese and Caucasian is an essential part of Cilla’s family and her life story. Sincerely touching and irresistibly funny, this is the first book in an excellent three-part series.

Abbie has big plans for the school year, such as running for class president. She’s also thrilled to have her own shiny new locker – that is, until she finds out she has to share it with someone else. Follow the frazzled life of Abbie Wu as she navigates the hazards of middle school in this fast-paced title filled with adventures and doodles.

Chloe Cho has always wondered why her parents will NEVER talk about their lives in Korea before moving to the United States. Other people’s parents are thrilled when their kids ask questions about their lives, but Chloe’s parents just dodge and change the subject. As Chloe enters seventh grade, she is excited to learn that she will have a Korean American teacher who can finally help her learn more about her heritage, but what she learns is VERY different from what she imagined, leading to a whole different set of questions.

Frank Li is a high school senior trying to balance his parents’ expectations of him as a first-generation Korean American, and their racism, with his own dreams and desires. He sets up an elaborate plan to start dating a white girl without his parents knowing but ends up finding his heart pulling him in a different direction. As he faces unexpected obstacles, Frank must figure out what is most important to him and how he can best help all those he loves.

Jay is preparing to graduate high school and attend the University of Michigan in the fall, but his plans take a turn when he learns that his Filipino cousin Jun was killed as part of the president’s war on drugs. With his family refusing to discuss what happened, Jay travels to the Philippines himself to find out the truth. In this captivating story, Jay has to work through more than he expected to find the full truth and his own peace.

You Bring the Distant Near by Mitali Perkins (also available as an eBook and an eAudiobook on OverDrive, and as an audiobook on CD)

In this sweeping novel, author Mitali Perkins draws on her own experiences as an immigrant to the United States to give readers a look into the life of one family across generations. Hear from alternating narrators in the Das family as they experience defining moments during their adolescences, spanning decades and continents. Each woman brings her own views and strengths to the story as she works to find her way through the challenges that face her.

Poet Ocean Vuong’s debut novel is a moving title about class, race, love, and the power of storytelling. Written in the form of a letter to his illiterate mom, Little Dog – our speaker – recounts his family’s history from before he was born, using it as a gateway to expose parts of his own life that his mother has never known. With a stunning rawness and grace to its prose, this is an intimate, striking portrait of the Vietnamese immigrant experience.

The Ghost Bride by Yangsze Choo

In the Chinese community of 1890s Malaya, Li Lan, the 17-year-old daughter of a struggling merchant, accepts an offer from the wealthy Lim family to become a ghost bride to their recently deceased son, ensuring her a future of comfort and respect as the widow of a man she never knew. What she expects to be her uneventful new life takes an unexpected turn as she finds herself haunted by her ghost husband and drawn into the land of the dead. Hunted by vengeful spirits and assisted by creatures of legend, Li Lan must solve the mystery of her husband’s death and find her way back to the land of the living. By weaving together both history and mythology, Choo creates an enchanting and atmospheric fantasy adventure.

They Called Us Enemy is a graphic novel memoir written by famed Star Trek actor George Takei. Detailing his family’s internment during WW2, it explores the tough choices made by his parents during this dark time of sanctioned racism. Though he was just a child at the time, Mr. Takei’s insights explore his feelings of betrayal and injustice during this harsh chapter of American history.

The Elkridge Branch + DIY Education Center opened the doors of its new building in March 2018. Our staff are always happy to help you with your questions about books, tools, technology, and more!