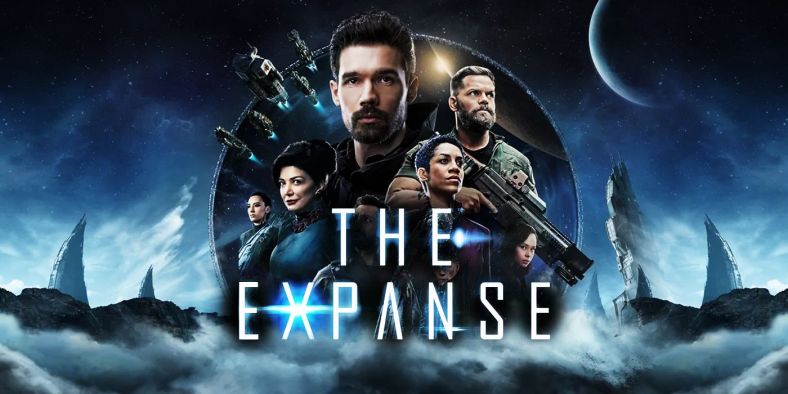 James S. A. Corey (pen name of writers Daniel Abraham and Ty Franck) has written a nine-book sprawling science fiction series about humanity among the stars and first contact (and beyond!). It all begins in Leviathan Wakes, with James Holden and the crew of (eventually) the spaceship Rocinante. You could say it’s an apt name, as Holden has a tendency to tilt at metaphorical windmills.

In this far-future novel, humanity populates Earth, Mars, and the asteroid belt beyond Mars where lucrative, dangerous mining takes place and people live mainly on ships and stations. Earth is ruled by the United Nations, which provides the bare basics to an overpopulated, under-resourced planet. Mars is still undergoing massive terraforming, so its population lives in a constrained and almost martial society. The Belters are the under-appreciated scruffy lower class of the solar system, and they are ready to change things – with revolution if necessary as the OPA (Outer Planets Alliance) flexes its muscles. The OPA’s politics walk the line between a new nationalism and terrorism, often depending on a character’s point of view.

In this strained atmosphere, the ice-hauling ship Canterbury, aboard which Holden is the executive officer, responds to an emergency beacon. To say nothing goes right about the situation is a massive understatement – as the Cant is destroyed, the Martian Navy is implicated, and its shuttle limps into Ceres Station with a crew of reluctant heroes. Meanwhile on station, Detective Joe Miller has been hired to locate Julie Mao, missing daughter of an interstellar magnate. Julie Mao is the thread that binds all the mysterious doings together, including the Cant‘s destruction, the OPA’s aggression, and a strange, deadly organism known as the “protomolecule.” This sounds complicated but is really just the set-up for the rest of the excellent, thrilling series.

Many smaller, personal stories held my attention within the larger framework, which helps make this massive undertaking worth the effort. Usually science fiction gives you a plot driven by big ideas or by identifiable characters to root for in strange situations – this has both! Naomi Nagata, Belter and engineer extraordinaire, stole my heart early and remained my favorite character with her deep backstory and good heart. I also love straightforward (blunt) mechanic Amos, who sees the world in simple terms of survival but who always has his crewmates’ backs. The list goes on as the world expands.

But wait … maybe you’re not ready to commit to nine books, all in excess of 500 pages? I mean, it’s a great way to lose track of time and what’s going on in the “real world.” Or maybe you’re a fan and want to experience the story via another medium? In that case, I highly recommend the TV series from SyFy channel and Amazon Prime, with the first four (of six) seasons available on DVD. The show follows the first few books to a remarkable degree, probably because the authorial team acts as producers. In some ways, the streamlined show moves even faster than the books, which is a feat. I love switching between Earth, Ceres Station, various ships, and other locales. Each separate set is completely realized and feels lived in. Also, the casting choices are, pardon the pun, stellar! There’s real chemistry among the Roci’s crew, as well as the folks who seem fully invested in the stakes of their individual story.

It’s a completely binge-able series, however you choose to interact with it – books, screen, or both.

Kristen B. is a devoted bookworm lucky enough to work as the graphic designer for HCLS. She likes to read, stitch, and make soup in the winter.